As we celebrate International Women’s Day and the 100th anniversary of women having served in Australian parliaments (starting with Edith Cowan in 1921), women’s issues are more prevalent than ever.

This is, however, not all for the right reasons. Even in the last month, we’ve had reports of systemic, ghastly sexism and worse in our national parliament, reports of schoolboys acting shamefully toward young women and Australian of the Year, Grace Tame, depicting her horrific abuse by a man in a position of power.

COVID has not helped. In September 2020, 865,000 women left the US workforce compared to 216,000 men. Comparable statistics are not available in Australia but strong evidence suggests the pandemic has dealt a major blow to women, particularly those with children under ten. In fact, one in four US women is considering leaving the workforce entirely.

There is still a long way to go for equality in both society and business. We need to keep our foot on the pedal. Even now, only about 32% of management/leadership positions in Australia are held by women, and women generally are paid 15% less than men who hold similar positions.

Despite this, there are some simple things you can do as a business owner or manager to help build a more equitable workplace culture, particularly as we come out of the COVID pandemic.

I’ve blogged before about how a typical recruitment process is biased towards overconfidence and machismo rather than skills and capabilities.

Take the interview process. You have a standard set of questions that you ask your candidates. At some stage, you typically try to catch people out with a random question to ‘see how they stand up under pressure’. This is a form of bias toward people who can talk their way out of situations and sound plausible, whether truthful or genuine. Is that the skill you are looking for?

Try sending candidates the questions you will ask before the interview, and let them present (and submit) their answers. The interview should be about reviewing how genuine the candidate is about their skills and capabilities, and how well the candidates can put their point across (both in written form and verbally) with some level of preparation.

How do you promote?

Studies show that both women and men aspire to leadership (around 75% of both). However, in Australia the number of women in leadership roles hovers at a mere 32% and women CEOs make up 18% of the pack.

Generally, women do not self-promote as well as men and will not be as quick to ‘put up the hand’ when a promotion is available. However, it is a myth that this is because women want work-life balance more than men or to spend time with the family and therefore don’t want the responsibility.

Don’t fall for that bit of ‘mansplaining’!

Actively seek out the leaders of your organisation, rather than just look at those who apply for roles and be careful of your own bias in wanting to promote people who are similar to you or have a similar style.

Humour and non-work-related chat in the workplace is necessary for motivation, work culture and the general enjoyment of work.

However, it quickly has the opposite effect if it is in any way sexist (or racist). This doesn’t have to be overtly personally hurtful – it could be passively referring to the shape of a woman or her weight or attractiveness. Women may not seem affected and may even laugh but this kind of sexist humour contributes to a culture that is not inclusive, particularly if it is allowed to occur often.

And saying things like ‘Sorry we’re not very PC here’ or ‘We’re just joking around’ does not cut it. 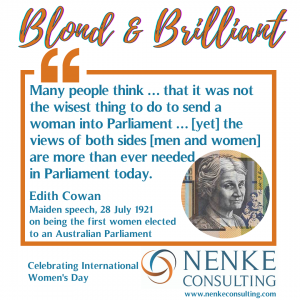 There are many things to celebrate the advancement we’ve made around gender equality at work and society at large. However, recent events show that we need to keep focusing on it, even in small ways to overcome bias and ensure our workplaces are better and more inclusive for all.